Three Chinese astronauts, the first sent to orbit for space station construction, completed their three-month mission and returned to Earth safely on Friday. They spent 90 days at the Tianhe module on China’s space station, some 380km (240 miles) above Earth. In orbit the astronauts conducted spacewalks, validated Tianhe’s life-support system. Tested the module’s robotic arm, and sorted supplies for upcoming crewed missions from China.

On June 17, the Shenzhou-12 spaceship was launched from the Jiuquan Satellite Launch Center in northwest China and docked with the space station core module Tianhe. After the docking, the three astronauts entered the core module and began their three-month stay in space.

The three men had on Thursday boarded the Shenzhou-12 crewed spacecraft and undocked from the space station. Nie Haisheng, Liu Boming and Tang Honbo touched down in the Gobi desert in Inner Mongolia at around 13:35 local time (05:35 GMT) on Friday.

The Shenzhou-12 return module separated from the orbiting module at 12:43 pm on Friday. And then followed by a smooth separation from the propellant, according to the China Manned Space Agency (CMSA).

State broadcaster CCTV showed footage of the spacecraft parachuting to land in the Gobi Desert, where it was met by helicopters and off-road vehicles. Minutes later, a crew of technicians began opening the hatch of the capsule, which appeared undamaged.

The three astronauts emerged about 30 minutes later and were seated in reclining chairs just outside the capsule. To allow them time to readjust to Earth’s gravity after three months of living in a weightless environment. The three were due to fly to Beijing on Friday.

After the rescue teams arrived to pick up the taikonauts, each crew member was assigned several medical staff to conduct preliminary health check-ups. As well as air condition examinations and the capsule’s attitude upon its return. To double check if there was any risk for the safe exit of the crew.

The trio looked relaxed and waved to the ground crew after they exited the return capsule. Later, they were escorted to a helicopter by the ground crew, according to Xinhua reporters at the scene.

The three astronauts arrived at Beijing by plane Friday night, but they will not go immediately back home to celebrate the festival with their families. Instead, they will undergo several weeks of quarantine for a comprehensive medical examination and health assessment, according to Xu Wenlong, a research assistant with the China Astronaut Research and Training Center.

The homecoming heroes did not have to wait too long before the search and rescue. The squad at the Dongfeng landing site reached them only five minutes after the return capsule made its landing on Earth.

The professional medical personnel will help the astronauts re-adapt to the gravity and environment on Earth, restore their body functions as soon as possible and improve their immunity, through multiple methods of exercise, diet, massage, physical therapy, and treatment with traditional Chinese medicine, Xu said.

The Shenzhou-12 mission was the first of four crewed missions planned for 2021-2022 as China assembles its first permanent space station. The process requires 11 missions, including the launches of the station’s three modules. The second crewed mission is planned for October, with the next batch of astronauts expected to stay on Tianhe for six months.

The Tianzhou-3 cargo craft and the Shenzhou-13 manned spaceship will also be launched later this year to dock with Tianhe, and another three astronauts will then begin their six-month stay in orbit. The government has not announced the names of the next set of astronauts nor the launch date of Shenzhou-13.

China has sent 14 astronauts into space since 2003, when it became only the third country after the former Soviet Union and the United States to do so on its own. The government in Beijing has simultaneously pushed ahead with uncrewed missions, placing a rover on the little-explored far side of the Moon. Last December, the Chang’e 5 probe returned lunar rocks to Earth for the first time since the 1970s.

The Chinese space agency is planning a total of 11 launches before the end of next year, including three more crewed missions that will deliver two lab modules to expand the 70-tonne station.

“The construction of the space station is a milestone in China’s space industry, which will make pioneering contributions to the peaceful use of space by humanity,” said Xi, also general secretary of the Communist Party of China Central Committee and chairman of the Central Military Commission.

Ahead of that Shenzhou-13 mission, China will send an automated cargo spacecraft. Tianzhou-3 to Tianhe carrying supplies needed by the next crew. The next crew is expected to stay in orbit for an even longer six months. It may include the first female taikonaut in the space station building stage.

“The successful completion of the mission paves the way for future regular missions and utilisation of the (Chinese space) station,” said Chen Lan, an independent analyst at GoTaikonauts, which specialises in China’s space programme.

China has poured billions of dollars into its military-led space programme in recent years as it tries to catch up with the United States and Russia.

China has made strides in its space ambitions in recent years. In 2019, it became the first country to send a robotic rover to the far side of the Moon. The successful mission is another demonstration of China’s growing confidence and capability in the space domain.

But it had to develop its own space station, because it has been excluded from the International Space Station project. China’s space station, expected to be completed by the end of 2022, will be the sole alternative to the 20-year-old ISS, which may be retired in 2024.

After the five launch missions this year, China plans to have six more missions, including the launch of the Wentian and Mengtian lab modules, two cargo spacecraft and two crewed spaceships, in 2022, to complete the construction of the space station.

China also plans to dispatch another mission in 2024 to bring back lunar samples and is pursuing a possible crewed mission to the moon. And eventually building a scientific base there, although no timeline has been proposed for such projects. A highly secretive space plane is also reportedly under development. 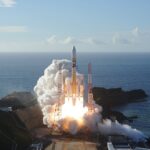