NASA’s Perseverance Rover and its little helicopter Ingenuity landed together inside Mars on 18 Feb at Jezero Crater. On 1st Jun, the robotic duo completes 100 Martian days or 100 sols. (1 sol is slightly longer than an Earth day, it equals to 24 hours and 40 minutes of Earth day.)

Perseverance has already tested all of its cameras and scientific instruments, beamed home more than 75,000 images, supported and documented Ingenuity’s historic flight campaign, captured the first-ever true audio on the Martian surface, generated oxygen from the carbon dioxide-dominated Martian atmosphere and begun traveling to its first “exploration zone,” the rover team wrote in a Twitter post today. (The oxygen generation comes courtesy of an instrument called MOXIE that’s designed to demonstrate tech that could help humanity get a foothold on Mars in the future.)

In the days thereafter, Perseverance will potentially scoop its first samples on Mars and leave its first cigar-sized tube on the surface, small caches designed to be picked up by a future sample return mission, to be brought back to Earth. Its MOXIE instrument, a technology demonstrator that will pluck carbon dioxide from the Martian atmosphere for chemical transformation into breathable oxygen, will likely be up and running, as will MEDA, a Martian weather instrument and RIMFAX, which will use radar to look for water-ice underground.

100 sols are just the beginning, however as there’s a lot more excitement to come. Perseverance has just started to focus on its own science mission, which will last at least one Mars year, or 687 Earth days. That mission has two main goals: to hunt for signs of ancient Mars life and collect and cache dozens of samples for future return to Earth.

The 1,025-kilogram rover is powered by a radioisotope thermoelectric generator, fueled by heat from decaying plutonium, which should help it avoid a dust-laden fate such as prematurely ended the missions of its solar-powered predecessors Opportunity and Spirit; but getting up and running as soon as possible after the landing is still crucial. The rover has an ambitious amount of science to conduct in its primary mission lasting one Martian year.

And, although its mission is likely to be extended, given the overwhelming richness of its landing site in the ancient Martian river delta within Jezero Crater, scientists are eager to get the ball rolling sooner rather than later.

Perseverance needs to first endure its autonomous seven-minute descent to the surface known as the “seven minutes of terror”. And then check its vital organs are in working order as well as launch a first-of-its kind attempt at aerial flight. Suffice to say, “The busy rover’s schedule is positively jam-packed. Interplanetary mission timings are always subject to change depending on how things progress, of course, but a timeline is already in place for Perseverance’s first 100 days on Mars.”

The very first thing Perseverance will do after landing is to fire some pyrotechnic devices, releasing the covers on cameras on board the rover. It will then take images in front and behind the rover and send those back to Earth via NASA’s orbiting Mars Odyssey spacecraft and Europe’s Trace Gas Orbiter. After that? A quick nap of course, “to recharge the batteries until the next day on Mars,” says Jennifer Trosper, deputy project manager for the mission at NASA’s Jet Propulsion Laboratory (JPL) in California.

Over the next few days, Perseverance will go through a number of important tasks to ensure it is up and running smoothly. It will confirm its exact location on Mars, while the team will “try to establish the vehicle’s base functions—power, thermal, and communications,” says Trosper. “Because if any of those base functions aren’t working, then the vehicle can be in harm very quickly.” It will also use the sun’s overhead position to figure out where exactly Earth is in the sky for direct communications, and then run through checks of its instruments and systems, while continuing to beam back images of its surroundings, too.

From here, the helicopter’s mission begins. It has a 30-day window to conduct up to five autonomous flights on Mars, each lasting up to 90 seconds. Ingenuity performed the first flight of this extended mission on May 22, encountered its first patch of rough Red Planet air in the process: The helicopter suffered a glitch that briefly interrupted the flow of photos from its navigation camera to its onboard computer. But Ingenuity powered through the anomaly, landing safely near its designated touchdown site.

The flights will begin low and short but should eventually progress to higher altitudes and distances of potentially a few hundred meters. “Flight number five could be something as complex as liftoff, fly some distance, pick a new landing site by itself and land at this site,” says Ravich. Only one flight can be attempted per day at most, with the helicopter charging in between. Watching on will be Perseverance, taking images and possibly even video of the flights.

After its first 100 days on Mars, possibly sometime in June, the rover will be ready to conduct one of the most exciting searches for life on Mars to date. It is a mission that will begin unlike any other, given the helicopter demonstration in its early phase. But once that is done, and the rover has gone through its checks to confirm it is properly functioning, its primary mission on Mars will be truly underway. 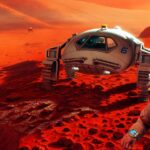 How to Travel From Earth to Mars in 2021