SpaceX has won a contract, worth over $102 million, to transport military supplies and humanitarian aid around the world using a rocket.

The contract, awarded Friday, falls under the Air Force Research Laboratory’s rocket cargo program, which aims to take advantage of the falling price of heavy launch capabilities that SpaceX and other companies have brought to the market in recent years.

The contract states that SpaceX will “demonstrate technologies and capabilities to transport military cargo and humanitarian aid around the world on a heavy rocket,” according to SpaceNews.

The contract doesn’t specify which SpaceX rocket or vehicle the initiative will utilize. SpaceX has used its Falcon 9 rocket and Falcon Heavy (which is made up of three Falcon 9 boosters) for military missions in the past.

This relationship stems from the fact that the DoD is “very interested in the ability to deliver the cargo anywhere on Earth to support humanitarian aid and disaster relief,” Greg Spanjers, the AFRL rocket cargo program manager, told SpaceNews.

Spanjers added that, while SpaceX has secured this initial contract, the Air Force plans to work with other companies as well as part of this program. The new contract doesn’t specify which of SpaceX’s launch vehicles will be used for this transport. But under the agreement, the AFRL will be able to view and access data for all of SpaceX’s orbital launches and booster landings so the right vehicles for the job can be chosen and assessed.

Spanjers said there is no specified timeline for a demonstration at this point. “AFRL will be leveraging several commercial demonstration launches over the next few years to collect the data,” he said. The Air Force “does not drive this schedule but rather will collect data whenever SpaceX flies relevant missions.”

SpaceX has been flying reusable Falcon 9 rockets for years and also has a heavy-lift Falcon Heavy rocket with reusable boosters for larger missions. The company is also developing a massive rocket, called Starship, that will use a reusable Super Heavy booster to launch up to 100 metric tons to Earth orbit. That rocket, SpaceX CEO Elon Musk has said, could be capable of point-to-point travel around Earth.

Under the new contract, the AFRL will also be able to call upon SpaceX to demonstrate its heavy cargo transport and landing capabilities, though there is not yet a specified a timeline for when such a demonstration might happen, SpaceNews noted.

SpaceX and the Air Force will explore the use of intermodal containers that are compatible with other transportation delivery modes.

As part of the contract, SpaceX will also design cargo bays for the Air Force, specifically cargo bays that can be quickly loaded and unloaded and that can fit with U.S. Transportation Command intermodal containers, according to SpaceNews. 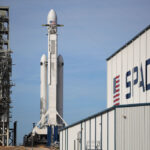