Olympus Mons is the one of the biggest volcano in the solar system. “It is about the same size as the state of Arizona, and located in the Tharsis volcanic region in Mars”, According to NASA. It’s nearly three times the height of Earth’s Mount Everest, which is about (16 miles or 25 kilometers).

Olympus Mons was formed after lava slowly crawled down its slopes, and it is a gigantic shield volcano. Its average slope is only 5 percent that means the mountain is probably easy for future explorers to climb. It was formed by magma chambers that lost lava (likely during an eruption), and its summit is a spectacular depression some 53 miles (85 km) wide.

Mars not only hosts the largest volcano of the solar system, but also the largest canyon. It is about four times longer than the Grand Canyon, which has a length of about 500 miles (800 km). “Valles Marineris is roughly 1850 miles (3000 km) long”, according to NASA.

There are several theories about its formation, but researchers aren’t sure how Valles Marineris came to be. Many scientist suggest that when Valles Marineris was formed, it contributed to the growth of Valles Marineris. Lava moving through the volcanic region pushed the crust upward, which broke the crust into fractures in other regions.

Gale Crater is host to extensive evidence of past water on Mars. It made famous by the landing of the Curiosity rover in 2012. Curiosity stumbled upon a streambed within weeks of landing, and found more extensive evidence of water throughout its journey along the crater floor. Curiosity is now summiting a nearby volcano called Mount Sharp (Aeolis Mons) and looking at the geological features in each of its strata.

Results from 2018 announced these organics were discovered inside of 3.5-billion-year-old rocks. One of Curiosity’s more exciting finds was discovering complex organic molecules in the region, on multiple occasions. Researchers announced the rover also found methane concentrations in the atmosphere change over the seasons. Methane is an element that can be produced by microbes, as well as geological phenomena, so it’s unclear if that’s a sign of life.

Mars is famous for hosting strange features called Recurring slope lineae. It’s hard to figure out what these RSL are, though. But it tends to form on the sides of steep craters during warm weather. Pictures shown here from Hale Crater (as well as other locations) show spots where spectroscopy picked up signs of hydration.

In 2015, NASA initially announced that “the hydrated salts must be signs of running water on the surface”. But later research said that the RSL could be formed from atmospheric water or dry flows of sand. In reality, we may have to get up close to these RSL to see what their true nature is.

If the RSL indeed host alien microbes, we wouldn’t want to get too close in case of contamination. While NASA figures out how to investigate under its planetary protection protocols, future human explorers may have to admire these mysterious features from afar, using binoculars.

Mars is a planet mostly shaped by wind these days, since the water evaporated as its atmosphere thinned. Researchers say these regions used to hold dunes that were tens of meters tall. But we can see extensive evidence of past water, such as regions of “ghost dunes” found in Noctis Labyrinthus. Later, the dunes were flooded by lava or water, which preserved their bases while the tops eroded away.

In an even more exciting twist, there could be microbes hiding in the sheltered areas of these dunes, safe from the radiation and wind that would otherwise sweep them away. Old dunes such as these show how winds used to flow on ancient Mars, which in turn gives climatologists some hints as to the ancient environment of the Mars. 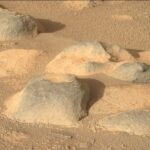