NASA has caught a rare cosmic event with one of its newest telescopes a black hole violently ripping apart a star roughly the size of our sun. Telescopes have captured the rare light flash from a dying star as it was ripped apart by a supermassive black hole. The phenomenon, known as a tidal disruption event, was captured in detail by NASA’s Transiting Exoplanet Survey Satellite, or TESS.

This rarely seen “tidal disruption event”, events are rare and stars need to be very close to a black hole in order to create one. Researchers said this type of cosmic event happens once every 10,000 to 100,000 years in a galaxy the size of the Milky Way. However, since there are billions of galaxies in the universe, scientists have been able to observe about 40 tidal disruptions over the years. One light-year is the distance light travels in a year, about 6 trillion miles (10 trillion kilometers).

TESS is surveying an area in the sky that is 400 times larger than what Kepler observed, including 200,000 of the brightest nearby stars. Over the course of two years, the four wide-field cameras on board will stare at different sectors of the sky for days at a time.

Ground and space-based telescopes provided follow-up observations of the event, capturing different wavelengths of light that carry information about speed and the makeup of the material from the star. The research team watched the event for 42 days before it peaked in brightness and 37 days after.

Scientists used an international network of 20 robotic telescopes called ASAS-SN (All-Sky Automated Survey for Supernovae) to detect the tidal disruption event back in January, before turning to TESS, which caught the beginning of the cosmic showdown.

The team used UV data from Swift to determine that the temperature dropped by about 50%, from around 71,500 to 35,500 degrees Fahrenheit (40,000 to 20,000 degrees Celsius) during the event. The team also estimated the size of the doomed star at about the same mass as our own sun. It didn’t have a chance against the black hole, which has a mass of more than 1 million times that of the sun.

As part of that mission, and for the first time, TESS stumbled upon a star being shredded by a supermassive black hole. The black hole responsible for the event likely weighs about six million times the mass of our sun and it’s positioned at the center of the 2MASX J07001137 galaxy, located 375 million light-years away in the constellation Volans. The star was likely similar to our sun in size.

Black holes usually reside at the center of most large galaxies, including our Milky Way. When stars wander too close to a black hole, they can’t escape the black hole’s gravity and get pulled apart. Some of the material is shot out into space. The rest makes a tasty meal for the black hole, which pulls the material into its hot, glowing accretion disk made of gas.

Studying this event not only provides new insight about black holes, but the unusual nature of this particular scenario. The galaxy containing this star contains more dust than other events like this and the star had a short period where it faded and cooled off before reaching its peak. 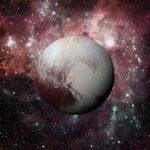 Why Pluto is no longer a planet? 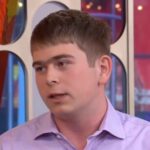