The Milky Way got its name from the way it looks from the ground: like a streak of spilt milk across the sky. That hazy white band is made up of stars, dust and gas. It looks like a flat stripe because we are viewing it from within its disk; if we were able to get above the Milky Way, it would look like an enormous spiral about 100,000 light years across. The Milky Way contains over 200 billion stars, and enough dust and gas to make billions more.

Since we live inside the Milky Way it is difficult to see its spiral form. There are some clues though. First, there is a concentration of stars along the galactic plane and particularly in the constellation of Sagittarius. This implies the Milky Way is disc-shaped with a central bulge, just as we see in other spiral galaxies.

If you could look down on it from the top, you would see a central bulge surrounded by four large spiral arms that wrap around it. Spiral galaxies make up about two-third of the galaxies in the universe. The spiral is made up of four huge arms of stars connected by a straight bar at the galaxy’s centre. The arm that’s home to Earth is a smaller one called the Orion arm, where our solar system resides about 26,000 light years from galactic centre.

Second, measurements of the velocities of stars and clouds of gas reveal that their motion is not random but follows a rotational pattern – just like those we see in other spiral galaxies.

Most convincingly, measurements of the distances of these objects show clearly that they are concentrated along the arms of a spiral.

Let’s take a look at the Milky Way. A glance up at the night sky reveals a broad swath of light. Described by the ancients as a river, as milk, and as a path, among other things, the band has been visible in the heavens since Earth first formed. In reality, this intriguing line of light is the center of our galaxy, as seen from one of its outer arms.

At the center of the galaxy is the galactic bulge. The heart of the Milky Way is crammed full of gas, dust, and stars. The bulge is the reason that you can only see a small percentage of the total stars in the galaxy. Dust and gas within it are so thick that you can’t even peer into the bulge of the Milky Way, much less see out the other side.

Recent measurements have weighed the galaxy at between 400 billion and 780 billion times the mass of the sun. By focusing on how the Milky Way affects its neighboring globular clusters, dense groups of stars smaller than a galaxy, scientists were able to calculate the mass of the Milky Way at varying distances. The result can help them improve their understanding of how much of the galaxy is made up of ordinary material like dust and stars, and how much is composed of dark matter.

More than half the stars found in the Milky Way are older than the 4.5-billion-year-old sun. Galaxies like ours typically undergo a stellar baby boom, churning out stars in enormous quantities roughly 10 billion years ago. The Milky Way is just one of more than 100 billion galaxies in the universe, but it’s the one that we call home. 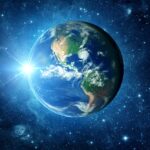 How fast does the earth spinning in space