NASA engineer David Burns produced an engine of speed of light concept that, he says. It could theoretically accelerate to 99 percent of the speed of light – all without using propellant. Dr Burns, from Nasa’s Marshall Space Flight Center in Alabama, unveiled the idea in a head-spinning paper posted to Nasa’s website.

As a thought experiment to explain his concept, Burns describes a box with a weight inside. Threaded on a line, with a spring at each end bouncing the weight back and forth. In a vacuum – such as space – the effect of this would be to wiggle the entire box, with the weight seeming to stand still.

In its simplest terms, the engine of speed of light works by taking advantage of how mass changes at the speed of light. In his paper, Dr Burns provides a concept to break this down that describes a ring inside a box, attached to each end by a spring.

The helical engine or the engine of speed of light gets around this using hi-tech particle accelerators like those found in Europe’s Large Hadron Collider. Tiny particles are fired at high speed using electromagnets, recycled back around the engine, and fired again. Using a loophole in the laws of physics, the engine of speed of light could theoretically reach speeds of around 297million metres per second, according to Dr Burns.

The engine of speed of light accelerates ions confined in a loop to moderate relativistic speeds. And then varies their velocity to make slight changes to their mass. The engine of speed of light then moves ions back and forth along the direction of travel to produce thrust. This in-space engine could be used for long-term satellite station-keeping without refueling.”

When the ring is sprung in one direction, the box recoils in the other, as is described by Newton’s laws of motion. Every action must have an equal and opposite reaction. When the ring reaches the end of the box, it will bounce backwards, and the box’s recoil direction will switch too,

Overall, the box would stay wiggling in the same spot. But if the mass of the weight were to increase in only one direction, it would generate a greater push in that direction, and therefore thrust.

According to special relativity, objects gain mass as they approach speed of light. So, if you replace the weight with ions and the box with a loop. You can theoretically have the ions moving faster at one end of the loop, and slower at the other.

The helical chamber would have to be pretty large. Around 200 metres (656 feet) long and 12 metres (40 feet) in diameter, to be precise. And it would need to generate 165 megawatts of energy to produce 1 newton of thrust. That’s the equivalent of a power station to produce the force required to accelerate a kilogram of mass per second squared.

Travelling at such speeds, the theoretical machine could carry astronauts to Mars in less than 13 minutes, or to the Moon in just over a second. Travelling at these speeds, the light would struggle to keep up with you, warping your vision in bizarre ways. However, the real purpose of the so-called “helical engine” would be to travel to distant stars far quicker than any existing tech, according to Nasa engineer Dr David Burns.

An invention that immediately created a buzz. Indeed, if Dr. Burns’ engine of speed of light works as he predicts, it’s the door wide open to all space travel. For today, even our most modern spaceships, even those of the genius Elon Musk, are lagging behind miserably. It takes them years, even centuries, to reach even the smallest exoplanet. This makes it impossible to plan any human conquest of deep space for some time to come. But if we could travel at 1 billion km/h, i.e. about the speed of light, the sidereal world is within reach.

The concept, which Burns admitted he is not sure is viable, takes inspiration from high-tech particle accelerators. Similar to what is seen at the Large Hadron Collider at CERN. That’s not the only thing holding the helical engine back. Dr Burns reckoned it would have to be 198 metres long and 12 metres wide to work. The gizmo would also only operate effectively in the frictionless environment of deep space.

David Burns has another idea. He wants to do without propellant and go beyond the principle of action-reaction. He doesn’t need it in his concept. He has read the theory of relativity and especially the theory of special relativity which says that objects gain mass as they approach the speed of light. Take a one-kilogram block of stone and propel it at the speed of 380,000 km/s, and it will weigh several tons.

Travelling at these speed of light would struggle to keep up with you, warping your vision in bizarre ways. Everything behind you would appear black, and time would appear to stop altogether, with clocks slowing down to a crawl and planets seemingly ceasing to spin.

At such speeds, according to Albert Einstein’s theory of relativity, as the ring approaches the end of the box it will increase in mass. This means it will hit harder when it reaches the end of the box, resulting in forward momentum. The engine of speed of light itself will achieve a similar feat using a particle accelerator and ion particles, but that’s the general gist.

Today’s rockets, like those built by Nasa and SpaceX, would need tonnes of propellants like liquid hydrogen to carry people to Mars and beyond.

NASA is looking into the possibility of using ice and water on the surface of the moon as rocket fuel, but any potential solution would likely be years, if not decades, away. 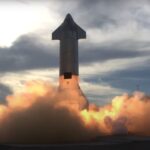 RIP Starship SN10’: SpaceX rocket goes up in flames after a successful landing 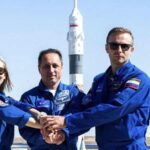