Glowing with the radiance of 10 million times that of our own Sun, Pistol Star is one of the intrinsically brightest stars in our Galaxy. It appears as the bright white dot in the centre of this image.

The Pistol Star was discovered by Don Figer, an astronomer at UCLA, using the Hubble Space Telescope in the 1990s. At the time of discovery, the Pistol Star was suspected to have been the most massive star known before it had started shedding material, with an initial mass of up to 200 solar masses. Astronomers believe that the star’s exceptionally high mass may be linked to its location near the Milky Way centre.

The Quintuplet Cluster is located around 26.000 light years from Earth in the direction of Sagittarius. It has extremely luminous Stars, including Red Supergiants. The Pistol Star is a candidate blue variable star (c LBV) and is one of the most luminous stars of all the known stars.

The initial mass of the Pistol Star was thought to be over 100 times as big as our Sun. However, this estimate has since been revised since pistol Star began shedding solar masses of material and has since suffered extreme mass loss.

It is thought to have expelled around 10 solar masses of material, 4,000 to 6,000 years ago, and is now it is believed to measure much less in mass.

Pistol Star has a radius of 306 times that of the Sun (written as 306 R) and registers around 1,953 AU on the astronomy radius scale.

The Pistol Nebula contains about 9.3 solar masses of ionized gas expelled by the Pistol Star a few thousand years ago. It completely surrounds the star and its largest shell spans 4 light years.

It was once thought to be the brightest star in the night sky however over time this claim was adjusted as it was discovered that another star had this claim to fame – known as Eta Carinae.

The stellar wind associated with the Pistol Star is much stronger than that of the Sun. It is estimated to be over 10 billion times more powerful than the Sun.

The Pistol Star lies at a 17 hours 46 minute right ascension, and a declination of -28 degrees.

The Pistol Nebula is roughly rectangular in shape and the ejected material is distributed in two shells centred on the Pistol Star. The nebula got its name in the 1980s, when low-res images revealed a pistol-like shape.

Pistol Star is measured as having a luminosity of 1,600,000 times brighter than the Sun and estimated to radiate as much energy in 20 seconds as our Sun radiates over a year. 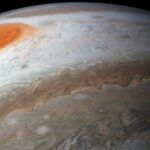 Jupiter Great Red Spot is deeper than we thought 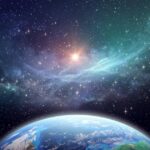