The Soyuz MS-19 mission to the International Space Station (ISS) lifted off at 08:55 UTC (04:55 EDT) on Tuesday, October 5 from Site 31/6 at the Baikonur Cosmodrome in Kazakhstan, before docking after a two-orbit rendezvous – albeit. Soyuz MS-19 after another troublesome docking, requiring manual control to complete the arrival.

Flying at a slightly lower altitude, and consequently moving faster than the space station, the Soyuz MS-19 quickly caught up with the laboratory for what turned out to be a manual docking. Soyuz MS-19 hatches were expected to be opened after extensive leak checks to verify an airtight structural seal.

The Soyuz MS-19 is scheduled to dock with Russia’s Rassvet mini-research module at about 8:12 a.m. EDT (1212 GMT). Docking occurred at 8:55 under manual control by Shkaplerov due to communication issues.

After a problem-free eight-minute 45-second ascent, the Soyuz MS-19 spacecraft separated from the booster’s third stage. Solar arrays unfolded and the crew set off on a two-orbit rendezvous with the space station.

The laboratory flew directly over the launch site about 33 seconds after liftoff, but moving at nearly five miles per second, the station leapfrogged ahead of the Soyuz MS-19 and was 1,200 miles in front by the time the crew reached its preliminary orbit.

The Soyuz MS-19 mission delivered one new Russian ISS crewmember for a six-month stay as well as an actress and director who will film the movie, The Challenge. Soyuz MS-19 mission is the first to launch under strict new regulations enacted last week by the Russian FSB. Federal Security Service which essentially forbids its citizens from reporting on the Russian space program outside of Russia, less that person then be classified as a “foreign agent.”

Soyuz MS-19 mission is unique from other station flights in that it did not just carry a new ISS crewmember Anton Shkaplerov. But also ferried up, for the first time, an actress and film producer/director. Yulia Pereslid and Klim Shipenko, respectively, who will spend 12 days on the outpost filming a movie.

Before going to the ISS through Soyuz MS-19, the actress and director had trained for almost six months — from May to October — at the Yuri Gagarin Cosmonaut Training Center.

Roscosmos first announced the film project in November 2020, after the news broke that actor Tom Cruise was in the early stages of working with director Doug Liman, SpaceX, Axiom Space and NASA to film a movie aboard the space station. Jumping at a chance to claim another first in space, Roscosmos quickly set about to cast the actress who would be the film’s lead.

Chalking up a space first of sorts, a Russian actress, her director-cameraman and a veteran cosmonaut rocketed into orbit, chased down the International Space Station. And successfully docked Tuesday, setting the stage for an out-of-this-world movie shoot.

Although a lot of filming has been done in space before, especially the space shuttle and ISS for IMAX movies that are shown in theaters. This is the first time scenes are being filmed for a fictional movie, all part of the commercialization of space.

This will mark the first time a feature film will be shot in space. And it is a major expansion from previous operations for Roscosmos, the Russian federal space agency. Previously, Roscosmos has allowed tourists who could afford the price tag to fly on Soyuz spacecraft to and from the ISS with extensive training.

After launching from Baikonur at 08:55 UTC on Tuesday, October 5. Soyuz MS-19 carried Shkaplerov, Pereslid, and Shipenko to the station in just over three hours later, with docking to the Rassvet module at 12:22 UTC. Soyuz MS-19 was later than expected, due to another issue with the KURS, requiring Anton to manually dock the vehicle.

Pereslid and Shipenko are now the first ordinary Russian citizens to fly to space, with Pereslid saying she never held a desire to travel to orbit before the opportunity for the film arose last year.

Shipenko, 38, is a film director, screenwriter, actor and producer. His earlier credits include the 2017 feature film “Salyut 7,” which was loosely based on the real 1985 mission to the last of the Soviet Union’s Salyut-class space stations.

Shipenko will fill several of the behind-the-scene roles, including director, make-up artist, sound editor and cinematographer. Most of the 35 to 40 minutes of filming will take place in Russia’s Nauka multi-purpose laboratory module, but other areas of the complex may be shown as well. It is not clear if any of the other Soyuz MS-19 Expedition 65 crew members will appear in the movie.

“This job would’ve been enormous even on Earth,” Peresild said before launch. “We’ll have ten days. But it won’t be like ten regular 12-hour shooting days, rather like two-to-three hours a day, when the cosmonauts will be able to work with us. The rest of time, Klim and I will be shooting with only me in the frame.

Peresild and Shipenko plan to spend 12 days aboard the space station. Filming in the Russian segment of the lab before returning to Earth in the Soyuz MS-18 spacecraft with Novitskiy, who will be wrapping up a 190-day Soyuz MS-19 mission. Once their 12 days of filming are complete, Pereslid and Shipenko will not re-board Soyuz MS-19 but will instead climb into Soyuz MS-18. And return to Earth on October 17, not with Anton Shkaplerov but with Soyuz MS-18 commander Oleg Novitskiy.

Shkaplerov will remain aboard the station and return to Earth next March or April. Aboard the MS-29 spacecraft with Dubrov and Vande Hei, who will have logged almost a full year in orbit since being launched last April 9.

Peresild and Shipenko will return to Earth with Novitskiy aboard Soyuz MS-18 on Oct. 17 (Oct. 16 local time in Kazakhstan). To accommodate the film, Dubrov’s and Vande Hei’s stays were extended for another six months. They will land with Shkaplerov in March, after 365 days in space. Vande Hei will have completed the single longest spaceflight by an astronaut in U.S. history.

Differing plots have been reported, with some indicating the film centers around a medical emergency requiring heart surgery in microgravity while others are vaguer — indicating a fast training period to perform surgery on a cosmonaut whose condition prevents a return to Earth. 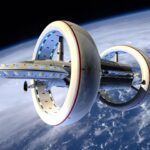