Let’s assume for a moment that you could possibly skydive off the International Space Station (ISS). Could you survive and would you end up back safely on Earth?

When anyone talks about human beings in space, one assumption is that the human in question is in the International Space Station, a large space station that orbits the Earth at an altitude between 330 and 435 kilometers.

We should begin by saying that skydiving from the ISS is very, very different from regular skydives that folks attempt back on Earth. In the latter, you jump from a plane that’s usually cruising at an altitude no more than 2.84 miles (4.6 kilometers) above the ground, but if you jump from the ISS, you will essentially be jumping from a height of at least 205 miles (330 kilometers, which is the lowest point in the orbit of the ISS). The difference of over 200 miles between the altitudes of these two jumps should be reason enough not to put jumping from the ISS in the same category as ‘regular’ skydives.

A person skydiving from a standard altitude of 12,000 feet (2.27 miles) above the ground falls through the sky for a minute and doesn’t require supplementary oxygen to sustain them during that fall. The reason for this is simple: at that height, the atmosphere is thick enough to provide ample breathable oxygen to the skydiver during his plummet. You’d likely faint from the intense gravitational forces, and, more horrifyingly, you’d burn up during reentry at around 2,912°F (1,600°C).

But the worst part really comes after you enter the mesosphere. There you’ll travel up to three times faster than the speed of sound. And the reason you can’t parachute from orbit is simply a matter of engineering.  We haven’t yet created parachutes that can survive being deployed, and then work properly, at speeds above around Mach 2.  At reentry speeds, which are in excess of Mach 23, parachutes just can’t hold up.  However, someday it may be possible.

However, this is not the case if you’re jumping from the ISS. It is so high above the surface of the Earth that the air becomes too thin (to the point of non-existence) to breathe. Felix Baumgartner, who accomplished a ‘space jump’ by jumping from a capsule 39 kilometers (24 miles) above the ground (which is still way below ISS’s altitude), needed supplementary oxygen to sustain him during his plummet.

Anyone trying to go higher than the Red Bull Stratos attempt would need a specialized space-diving suit that protects him or her from even more extreme conditions. Jumping from higher altitudes means reaching higher speeds during free fall in both vacuum and atmospheric conditions, and creates extra challenges for the spacesuit wearer to control descent and avoid going into a fatal spin. 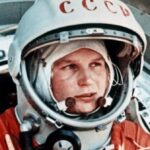 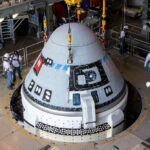