The universe just got a bit richer with the discovery of an apparent diamond planet orbiting a nearby star. A Diamond planet thought to be made largely of diamond may be less than glittering inside, new research shows.

Dubbed 55 Cancri e, the rocky world is only twice the size of Earth but has eight times its mass—classifying it as a “super Earth,” a new study says. First detected crossing in front of its parent star in 2011, the close-in planet orbits its star in only 18 hours. As a result, surface temperatures reach an uninhabitable 3,900 degrees Fahrenheit (2,150 degrees Celsius)—which, along with carbon, make perfect conditions for creating diamonds.

The notion of a Diamond planet hinges on an abundance of carbon. A few years ago, scientists reported that the star at the center of a solar system 40 light-years from our own had a carbon-to-oxygen ratio greater than one.

Related articles:
Spaceship neptune flying to the Edge of Space

“Science fiction has dreamed of Diamond planet for many years, so it’s amazing that we finally have evidence of its existence in the real universe,” said study leader Nikku Madhusudhan, a postdoctoral researcher at Yale University.

Planet 55 Cancri e is what’s known as a super-Earth because it is likely a rocky world orbiting a sun-like star, but it has a radius twice as large as that of our own planet, and a mass eight times greater. The Diamond planet also races around its star at such a close distance that one year lasts just 18 hours.

“It’s the first time we know of such an exotic planet that we think was born mostly of carbon—which really makes this a fundamental game-changer in our understanding of what’s possible in planetary chemistry.”

Related articles: Russian Spaceship, US astronaut will return to earth on it

Drawing on indirect observations of the Diamond planet, researchers of the 2012 study suggested its interior contained more carbon than oxygen. But in a new analysis, Teske and colleagues found that the host star doesn’t appear as carbon-rich as previously thought, which might dash hopes for a diamond-packed 55 Cancri e.

At only 40 light-years away, in the northern constellation Cancer, the Diamond planet sits relatively near Earth. In dark skies, 55 Cancri e’s host star is clearly visible to the naked eye.

“We find that because this particular host star is cooler than our Sun and more metal-rich, the single oxygen line analyzed in the previous study to determine the star’s oxygen abundance is more prone to error,” Teske explained. “Averaging all of these measurements together gives us a more complete picture of the oxygen abundance in the star.”

Diamond Planet Has Odd Chemistry. The new models fit with previous studies that showed 55 Cancri e’s parent star was abundant in carbon—much more so than our sun.

The researchers found that the Diamond planet may actually contain nearly 25 percent more oxygen than carbon. That’s about halfway between the carbon ratio of our sun and the ratio suggested by the previous study.

“If we make the assumption that the Diamond planet and its surrounding planets are all born from the same primordial disk of material, then it makes sense that the entire planetary system would be carbon rich,” said Madhusudhan, whose study will appear in an upcoming issue of the journal Astrophysical Journal Letters.

“Unlike our solar system, which is dominated by oxygen and silicates, this planetary system is filled with carbon,” said Spergel, who was not involved in the new study.

“Depending on where 55 Cancri e formed in the protoplanetary disk, its carbon-to-oxygen ratio could differ from that of the host star,” Teske said in a statement. “It could be higher or lower. But based on what we know at this point, 55 Cancri e is more of a ‘diamond in the rough.” 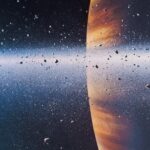 Diamond Planet: How it may be raining diamonds