Neptune is the only planet in our solar system not visible to the naked eye. In 2011 Neptune completed its first 165-year orbit since its discovery in 1846. The Neptune warm light we see here on our home planet is roughly 900 times as bright as sunlight on Neptune.

The ice giant Neptune was the first planet located through mathematical calculations. Using predictions made by Urbain Le Verrier, Johann Galle discovered the planet in 1846. The planet is named after the Roman god of the sea, as suggested by Le Verrier.

With a radius of 15,299.4 miles (24,622 kilometers), Neptune is about four times wider than Earth. If Earth were the size of a nickel, Neptune would be about as big as a baseball.

Neptune’s axis of rotation is tilted 28 degrees with respect to the plane of its orbit around the Sun, which is similar to the axial tilts of Mars and Earth. This means that Neptune experiences seasons just like we do on Earth; however, since its year is so long, each of the four seasons lasts for over 40 years.

How to see Neptune

Neptune’s apparent size is a tiny 2.4 arcseconds at its closest approach to us. Even with big magnification in a decent-sized scope, the best you’ll see is a recognizable disc (rather than a pinprick of light, like a star) with a bluish hue.

However, you don’t need to look for Neptune on just this one night. Whenever Aquarius and Pisces are in the night sky, Neptune will be in approximately the same place.

To find it locate the stars Phi Aquarii and Hydor in Aquarius. These are relatively bright stars, shining at magnitude 4.2 and 3.8, respectively.

Use even a small telescope at a magnification of 100x or to see color which is caused by methane in Neptune’s atmosphere absorbing red light and reflecting blue.

After a few months of rising during the day, making them impossible to see, the solar system’s biggest and most distant planets are once again visible at night. While Jupiter and Saturn are great targets to look for, shining brightly enough to see with the naked eye, the more distant ice giants are trickier to find. But if you have access to a pair of binoculars or a small telescope, you should be able to spot Uranus and Neptune in the coming weeks.

Neptune spends all of 2021 in the constellation of Aquarius the Water Carrier.  At a peak magnitude of +7.8, this bluish-hued world is only visible with good binoculars or a telescope. Evenings from January 1 through February 23; mornings from March 27 through September 13; evenings again from September 14 to December 31. 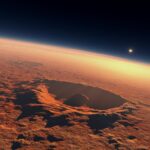 5 Tallest mountains of the solar system 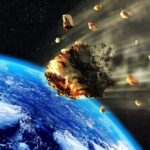 Astronomers Discover Half a Million Asteroids