The space tourism company Virgin Galactic successfully launched its founder Richard Branson and five other crewmembers into suborbital space on July 11, 2021 in a milestone mission that marked the first fully crewed flight of its VSS Unity space plane.

The company’s spaceplane Spaceship2 will be carried by the mothership WhiteKnightTwo, a custom-built plane, to about 50,000 feet before it separates. CJ Sturckow and Kelly Latimer are piloting the mothership and will land back on the runway while SpaceShip2 continues on.

SpaceShip2 pilots Dave Mackay and Michael Masucci will use the spaceplane’s hybrid rocket motor to push up through the sound barrier after about six seconds. The spaceship will then reach the edge of space at about 300,000 feet above Earth, about 55 miles up.

After reaching this altitude, VMS Eve let the space plane go and from there it rocketed up to 53 miles (86 km) above Earth’s surface before returning to Earth and landing not too far from where it took off at Spaceport America.

This test flight is the company’s fourth crewed spaceflight but the first to carry a full crew of two pilots and four mission specialists. In addition to Branson, the crew that flew included Beth Moses, Virgin Galactic’s chief astronaut instructor; Colin Bennet, the lead operations engineer at the company; and Sirisha Bandla, Virgin Galactic’s vice president of government affairs and research operations. Pilots Dave Mackay and Mike Masucci rounded out the team.

It was “the experience of a lifetime,” Branson said during a live broadcast of the flight. Branson, designated “Astronaut 001” for the Unity 22 mission, founded the Virgin Group of companies that includes Virgin Galactic.

The crew fulfilled a number of test objectives related to the cabin and customer experience, including evaluating the commercial customer cabin, the views of Earth from space, the conditions for conducting research and the effectiveness of the five-day pre-flight training program at Spaceport America.

With the Unity 22 test flight, Virgin Galactic aimed for the crew to evaluate the “private astronaut experience,” according to a statement from the company. The flight focused on “cabin and customer experience objectives,” the statement shared, which include evaluating comfort and what the cabin feels like with a full crew, the experience of being weightless and viewing Earth from space, demonstrating how the crew might conduct research experiments and seeing how well the crew’s training at Spaceport America prepared them for the mission.

For Virgin Galactic, the July 11 launch was a major milestone. Branson founded the company in 2004 after SpaceShip1, a vehicle built by the company Scaled Composites and financed by the late billionaire Paul Allen, won the $10 million Ansari X Prize for reusable commercial spaceflight.

Branson even announced a new partnership between Virgin Galactic and Omaze to raffle off two free tickets to space. Finally, the first time flyers—Bandla, Branson and Bennett—each got special Virgin Galactic astronaut wings with a tiny SpaceShip2 on them.

At this point the passengers will be able to unbuckle from their seats and experience weightlessness, looking through 17 windows down on Earth. The pilots will then use the spaceship wings to glide back to the runway landing where it took off.

Virgin’s space tourism competition Blue Origin launches its New Shepard to 62 miles up, reaching that internationally recognized space boundary. Several of the crew and pilots involved in the mission have already earned their commercial astronaut wings. Regardless of how high they fly, Virgin Galactic and Blue Origin already are referring to their prospective clients as “astronauts.”

More than 600 have reserved seats with Virgin Galactic at $250,000 and have been waiting years to fly. The company said after this flight it plans to fly two additional flights before it begins commercial service next year. 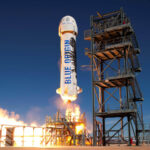 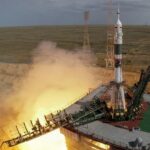