Record-breaking gusts of up to 122 mph (196 km/h) were recorded in England Friday (Feb. 18) as the United Kingdom, Ireland, Belgium and parts of the Netherlands and France face their worst storm in over three decades.

Trees have collapsed, trucks and cars have toppled on their sides, and thousands of homes have been left without power as the storm Eunice pummeled coastal regions around the Atlantic Archipelago and Europe’s western coasts with wind, snow and heavy rain, according to the UK Met Office.

Four people were confirmed to have died in the UK and Ireland by Friday evening. The Met Office said a wind speed of up to 122mph was recorded at the Needles on the Isle of Wight on Friday, provisionally the highest ever in England, and described the storm as the worst since the Burns’ Day storm 32 years ago in which 47 people died.

The record squall, the fastest wind speed ever recorded in England, was reported at the Needles Lighthouse on England’s Isle of Wight, beating the previous record of 118 mph (190 km/h) at Gwennap Head, Cornwall, in 1979, according to the Met Office. The fastest wind speed ever recorded in the U.K. was on Cairngorm Summit, a mountain in Scotland that experienced a gust of 173 mph (278 km/h) in 1986.

About a third of the UK population – about 20 million people – were told to stay at home as the Met Office imposed two rare red warnings for much of southern England, south Wales and London.

Millions have been urged to stay indoors, as one man, a 60-year-old council worker in Ireland, was killed by a falling tree, and a woman, in a separate incident in England, was seriously injured after being struck by flying roof tiles. Three people have also been killed on U.K. roads after their cars were struck by debris, according to the BBC. In mainland Europe, which was struck later on in the day, five people have reportedly been killed by the storm.

The disruption closed thousands of schools and businesses. About 435,000 homes were left without power early on Friday evening. Hundreds of train services and flights were cancelled, and major roads closed.

The raging storm has left roughly 110,000 U.K. homes without power and forced schools and businesses to close. The storm has also caused other widespread damage, with record-breaking winds shredding the fabric roof of London’s O2 arena, blowing off part of a spire from a cathedral, and even toppling the central tower from a power station.

Five people have died in mainland Europe after the storm made landfall there, including a 79-year-old British man in the Belgian city of Ypres.

“There are enough already serious and self-evident impacts of climate change happening without proverbially over-egging the pudding and linking each and every event to climate change,” Thorne added.

Buildings ranging from the lifeboat station at Sennen on the western tip of Cornwall to the Millennium Dome in London sustained damage. About 1,000 people were evacuated from the Dome as panels were ripped off by the storm.

Tom Morgan, a meteorologist at the Met Office, said better storm tracking and messaging than for the Burns’ Day storm and for the great storm of 1987 meant that people had been better prepared for Storm Eunice.

Suzanne Gray, a storm researcher at the University of Reading, says that further damage, and potential loss of life, may result if the storm forms a “sting jet,” a rare weather phenomenon that occurs when a narrow ribbon of air descends at speeds of more than 100 mph (160 km/h), creating a 6-to-12-mile-wide (10 to 20 kilometers) corridor of air. The last time a sting jet formed in the U.K. was during the Great Storm of 1987, which claimed 18 lives.

With police and motoring organisations warning drivers to stay at home, the two Severn crossings into Wales were closed – the first time they have ever both been shut because of wind at the same time. The Humber and Dartford Bridge crossings were also closed for periods. Many roads, including a motorway, were blocked by fallen trees. 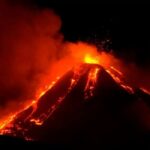 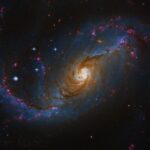 James Webb Telescope will do galaxy deep dive into dust