The Milky Way Galaxy contains more than 150 globular clusters. The exact number is uncertain because of obscuration by dust in the Milky Way band, which probably prevents some globular clusters from being seen. Messier 5 Globular cluster, a large group of old stars that are closely packed in a symmetrical, somewhat spherical form. Charles Messier noted it in 1764, but thought it was a nebula without any stars associated with it.

The globular cluster Messier 5, shown here in this NASA/ESA Hubble Space Telescope image, is one of the oldest belonging to the Milky Way. The majority of its stars formed more than 12 billion years ago, but there are some unexpected newcomers on the scene.

In the late 18th century, Charles Messier was busy hunting for comets in the night sky, and noticed several “nebulous” objects. He began to compile a list of these objects so other astronomers would not make the same mistake.

Among the many famous objects in this catalog is the M5 globular cluster (aka. NGC 5904). Located in the galactic halo within the Serpens Constellation, this globular cluster of stars is almost as old as the Universe itself (13 billion years).

The most massive stars age quickly, exhausting their fuel supply in less than a million years, and end their lives in spectacular supernovae explosions. This process should have left the ancient cluster Messier 5 with only old, low-mass stars.

As you gaze at M5 globular cluster, you’re looking at an object that’s around 13 billion years old, more than twice the age of our solar system, and almost as ancient as the universe itself. Considering that M5 globular cluster lies some 25,000 light-years distant, we can only imagine what this stellar city would look like if it were at the Pleiades’ distance of 430 light-years.

How to find M5 globular cluster ?

One way to locate the M5 globular cluster is to find the stars Arcturus and Antares, the brightest star in Scorpius. M5 globular cluster lies about 1/3 of the distance between the two stars, which means it located 23 degrees to the southeast of Arcturus.

Under ideal viewing conditions, M5 globular cluster can be spotted with the naked eye. It will appear as a faint point of light, located about 5° to the south-east of Alpha Serpentis. Using binoculars, spotting M5 globular cluster is easy since it will appear quite bright, even under urban skies. However, it will be difficult to resolve because it is so dense.

Larger aperture telescopes will easily begin resolution and notice that nearby 5 Serpentis is also a double star.

You really do not need to spend hours processing this object. Globular clusters are usually easy to process unless there is some nebulosity in the vicinity. The picture below shows what a single shot of M5 globular cluster looks like unprocessed.

Globular clusters are extremely luminous objects. Their mean luminosity is the equivalent of approximately 25,000 Suns. The most luminous are 50 times brighter. The brightest stars are the red giants, bright red stars with an absolute magnitude of −2, about 600 times the Sun’s brightness.

The globular cluster cluster are very large, with diameters measuring from 10 to as much as 300 light-years.

The M5 globular cluster is also one of the largest known, measuring 165 light-years in diameter and exerting a gravitational influence over a radius of 200 light-years.

Yet astronomers have spotted many young, blue stars in this cluster, hiding amongst the much more luminous ancient stars. Astronomers think that these laggard youngsters, called blue stragglers, were created either by stellar collisions or by the transfer of mass. 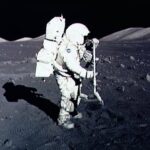 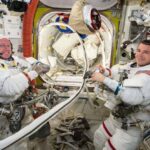