NASA’s Lucy spacecraft will launch in October 2021 on a 12-year journey to Jupiter’s Trojan asteroids. The Lucy mission will include three Earth gravity assists and visits to eight asteroids.

Lucy spacecraft mission will be the first space mission to study the Trojans. The mission takes its name from the fossilized human ancestor (called “Lucy” by her discoverers) whose skeleton provided unique insight into humanity’s evolution. Likewise, the Lucy spacecraft mission will revolutionize our knowledge of planetary origins and the formation of the solar system.

NASA notes that “no other space mission in history has been launched to as many different destinations in independent orbits around our sun” and that “Lucy spacecraft will show us, for the first time, the diversity of the primordial bodies that built the planets.”

The $981 million mission will be the first to explore a population of asteroids called the Trojans, which orbit the sun ahead of and behind Jupiter.

Studying Jupiter’s Trojan asteroids up close would help scientists hone their theories on how our solar system’s planets formed 4.5 billion years ago and why they ended up in their current configuration. “It’s almost like we’re traveling back in time,” said aerospace engineer Jacob Englander, who helped design Lucy spacecraft trajectory while working at NASA’s Goddard Space Flight Center in Greenbelt, Maryland.

But even the Hubble Space Telescope can’t resolve details about the composition and appearance of the Trojan asteroids. Scientists have a rough approximation of the size of each object to be visited by Lucy spacecraft, and know a bit about their colors. Some are gray, and some are more reddish in appearance.

The Lucy spacecraft will use traditional chemical propulsion technology that’ll help with maneuvering, but to save fuel, it’ll fly past points of interest instead of treading slowly.

After launch, the probe will make several laps around Earth to use its gravity to propel itself further towards Jupiter. Throughout Lucy spacecraft mission, the spacecraft will swing back into Earth’s orbit three times for gravity assists that push it towards the right path. In total, Lucy spacecraft will travel four billion miles on its trek toward the asteroids. The Lucy spacecraft is expected to reach the Trojan asteroids in 2027.

After blasting off from Cape Canaveral, the Lucy spacecraft will spend a year in an orbit around the sun similar to Earth’s, before returning to its home planet next October for a gravity assist slingshot maneuver to begin heading out into the solar system.

Then Lucy spacecraft will fly into the first Trojan swarm, visiting five asteroids — including a tiny moon of one of the objects — in just 15 months between August 2027 and November 2028.

A final swing by Earth in 2030 will set up Lucy spacecraft for the last encounter of the 12-year mission, a flyby of a binary pair of asteroids named Patroclus and Menoetius in March 2033. Each of the two objects are about the same size, with diameters of more than 60 miles (100 kilometers), making them the largest targets of Lucy spacecraft solar system sojourn.

NASA will provide coverage of upcoming prelaunch and launch activities for Lucy spacecraft, the agency’s first mission to explore the Jupiter Trojan asteroids.

The 3,300-pound (1,500-kilogram) Lucy spacecraft is scheduled for launch aboard an Atlas 5 rocket. Lucy is scheduled to launch no earlier than 5:34 a.m. EDT Saturday, October 16, on a United Launch Alliance (ULA) Atlas V 401 rocket from Space Launch Complex 41 at Cape Canaveral Space Force Station in Florida.

Armed with a high-gain antenna for communication with Earth; high-tech cameras (color, as well as black and white); an infrared spectrometer and thermometer, the spacecraft will check out several key features of these asteroids by capturing their physical properties:

Because Lucy spacecraft will rely on solar power for the mission, its arrays — large enough to cover a five-story building — had to undergo intense testing to ensure they won’t malfunction during spaceflight. They’re so huge because of how far the probe will be traveling from the sun.

According to NASA, it will take a total of 20 minutes for these crucial solar panels to extend after launch. “These 20 minutes will determine if the rest of the 12-year mission will be a success,” Levison said in a statement.

Ground teams completed testing of the Lucy spacecraft last month inside a climate-controlled clean room at the Astrotech payload processing facility in Titusville, Florida, a few miles from the gates to NASA’s Kennedy Space Center.

The tests capped a two-month campaign at Astrotech since the Lucy spacecraft arrived from its Lockheed Martin factory in Colorado. Technicians loaded hydrazine and nitrogen tetroxide propellants into the probe to feed its small maneuvering thrusters and main engine, which will help steer Lucy spacecraft toward its asteroid targets.

The Lucy spacecraft mission could offer new insights into the history of the solar system, including how all of the planets came to be and why they are aligned in their current configuration, NASA officials said.

Scientists believe the Trojan asteroids represent a diverse sample of the types of small planetary building blocks left behind after the solar system formed 4.5 billion years ago. Lucy spacecraft will fly by eight different asteroids from 2025 through 2033, including seven in the Trojan swarms. 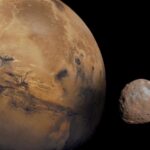 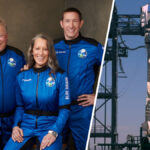