After 10 years fighting back photons in its peripheral vision, a NASA space telescope now has a way to use “nuisance light” to potentially increase its science productivity.

But now team members have figured out how to use that stray X-ray light to learn about objects in NuSTAR’s peripheral vision while also performing normal targeted observations. This development has the potential to multiply the insights that NuSTAR provides. A new science paper in the Astrophysical Journal describes the first use of NuSTAR’s stray light observations to learn about a cosmic object – in this case, a neutron star.

Engineers say the design quirk of NuSTAR ended up being a boon in looking at the object (SMC X-1) in X-rays. Neutron stars, which typically occur after supernova explosions, trap gas particles with their magnetic fields. The X-rays are generated as the particles are accelerated and energized during a journey to the star’s surface.

“This paper shows that this stray light approach is reliable, because we observed brightness fluctuations in the neutron star in SMC X-1 that we have already confirmed through direct observations,” lead author McKinley Brumback, an astrophysicist at the California Institute of Technology in Pasadena, California, said in a statement from NASA’s Jet Propulsion Laboratory (JPL).

The new approach is possible because of NuSTAR’s shape, which is similar to dumbbell or dog bone: It has two bulky components at either end of a narrow, 33-foot-long (10-meter-long) structure called a deployable mast, or boom.

NuSTAR launched to space in 2012 to study the cosmos in high-energy X-rays, providing a valuable addition to the study of SMC X-1. Its X-ray output pattern was finally established in recent years, following decades of work by NuSTAR and other telescopes to determine how often it changes brightness and why.

The light travels along the boom to the detectors, located at the other end of the spacecraft. The distance between the two is necessary to focus the light.

“Scientists have pinpointed several reasons why SMC X-1 changes in brightness when studied by X-ray telescopes,” JPL stated. “For example, the X-rays’ brightness dims as the neutron star dips behind the living star with each orbit … the stray light data was sensitive enough to pick up on some of those well-documented changes.”

NuSTAR’s stray light situation comes from a design quirk. The dumbbell-shaped observatory includes a 33-foot-long (10-meter-long) boom and two bulky areas on either end. The observatory typically observes by pointing one bulky end (with the optics). As the light is gathered, it travels and becomes precisely focused through the boom before arriving at the detectors, situated in the opposite bulky zone.

But stray light also reaches the detectors by entering through the sides of the boom, bypassing the optics. It appears in NuSTAR’s field of view along with light from whatever object the telescope directly observes, and is often fairly easy to identify by eye.

Unfortunately, nuisance light constantly enters the detectors through the sides of the boom as well, creating a faint circle of light on the sides of images. In recent years, NuSTAR team members began using computer models to predict the amount of stray light from various known X-ray sources. The result was an 80-object catalog with stray light observations, nicknamed “StrayCats.” 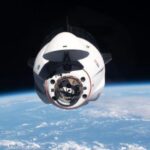 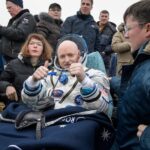 Russian medal given back by NASA astronaut Scott Kelly